I took advantage of last Tuesday’s (10/25) one-cent listing day and got 55 listings up and running.  Around fifteen were new listings, the rest were re-listings.  I was hoping for ten sales, expecting around five.  At the end of the week I had eight sales that totaled around $150.  Not too bad.  Three of the sales were first-time listings and five were re-listings.  One was a lot of kids books that I’ve listed quite a few times, and it sold at the last minute.  I was happy to see that one go.  Other repeats included a lot of Duplos, an Exersaucer accessory, a stuffed animal, and more kids books.  The items that sold right away included a Disney plush, a 4T outfit, and some vintage dolls.  The dolls were actually bought by someone in the Philippines.  Which, in theory, is fine.  I state in my listings that I will ship internationally but to contact me prior to bidding for a shipping estimate.  Which they did not do.  And when I was looking online to determine how much it would cost to ship the dolls I discovered it was almost the exact same amount she paid for them . . . $45!  I was skeptical to believe that she would be willing to fork out $90 for them.  But, after a day or so she e-mailed me to let me know that this was her first purchase on eBay, she was still trying to figure out how the payment system works, and that she wanted the dolls sent to her mom who lives in California.  And, this evening I received payment for the dolls, and the shipping address linked to the payment is indeed in CA.  So, yay.

And, for the last two days, I have had ZERO eBay listings.  My 50 free ones have kicked in but I have yet to use them.  I am a master procrastinator.  I’ve been playing around with the idea of opening an eBay store, but if I can’t get around to using my 50 free listings in a timely manner just imagine how much I’ll procrastinate when (if!) I open a store.  So off I go.  To list.  Maybe.

Well, this week has been a busy one.  Monday and Tuesday of last week I spent much more time than usual listing, listing, listing items on eBay.  I tried to use most of the free listings I had left on Monday and then took advantage of Tuesday being a free listing day.  At the start of Monday I had 4 active listings; by the end of Tuesday I had 60 active listings!  That is an all-time high for me.  They were a mix of around 30 new items and around 30 past listings that had not sold the first (or second) time around.

My goal was to sell 20 of my 60 items.  And . . . I sold 22!!  7 were BIN, 14 were auction.  It was an exciting and somewhat overwhelming week.  13 were new listings, 9 were at least second runs.  Many of the listings were small lots (6 or 8) of kids books that I decided I didn’t want to hold onto all winter, a few toys, a few infant clothing items, a costume, and a few other misc items.  I’d say I had most things priced to sell – while not willing to take a loss on anything, I am more interested in making a smaller profit and getting things out of my house (!) than holding on to them and waiting for top dollar.  I probably took in around $250, but many of my items (especially the books) were offered with free shipping.

I always try to get items shipped out the same day, or next day if payments come in later than noon.  All of this week I was a day behind that, just trying to keep up with it all. 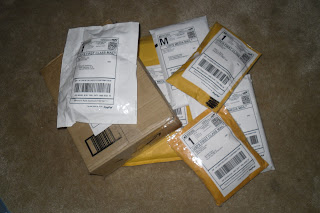 And, to top it all off, this Tuesday was a one-cent listing day.  So I once again spent a Tuesday getting things listed.  Right now I have 55 items listed, almost all are auction-only.  Maybe 15 or 20 new listings, the rest reruns that didn’t sell before.  And my action so far this week is . . . one whole bid!  It is on my most expensive item, so I guess that’s something.  My tentative goal this week was to sell 10 of the 55, more realistic is probably 5.  And that might even be a stretch.  Time will tell, I guess.