So which do you like better?  Selling a new item in no time flat, or *finally* selling something that you’ve had hanging around forever?
Usually I would say the older inventory.  I’m always excited to move something out that I was afraid had become a permanent resident.  I bought this flannel board set last summer, basically just to keep my son happy as we were marathoning through yard sales one day.  I paid $3 for it.  He forgot about it almost immediately, so I put it on eBay.  I thought somebody would want it.  The first few times I listed it there were watchers.  More recently – nothing.  Then out of the blue, it sold on Wednesday.  Still hasn’t been paid for (come on!), but the buyer has a decent number of feedbacks, etc, so I’m hopeful the money will roll in eventually.
But this week my favorite sale was the fast flip.  I bought these a couple weeks ago (paid around $6 total for all four).  I once again held on to them long enough for my oldest to forget about them, and then listed them on eBay.  Someone in Switzerland contacted me about them almost immediately, and she bought them before they were listed a full day.  She paid promptly, and they’re already on their way!
And here’s my annoying sale of the week.  It’s annoying because I am almost positive the buyer is not going to pay.  I had a bad feeling about it almost immediately.  And felt suspicious.  Have you ever wondered if another seller “buys” your item and then lets it go through the whole unpaid process just so that their item will be out there and have a greater chance of being bought?  No?  It’s just me?  I know, that’s a weirdly paranoid thing to think.  Especially in this case because there are a number of these magazines listed.   The most annoying thing, other than not getting any money out of the sale, is that the movie is premiering as I type, and by the time I make it through the unpaid process the hype will have faded.
And for my fellow Hunger Games fans, here’s a little humor.  I love it! 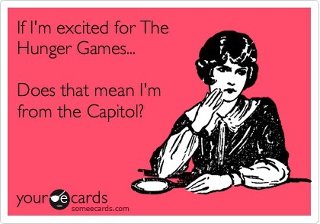