I don’t have a whole lot to write about, unfortunately.  The first part of this month has been super duper slow.  I usually average 3-4 sales per day, and right now I am averaging around one.  I have also been feeling very burnt out, post Christmas craziness.  Up until yesterday, I had done almost no new listing.  It’s kind of a vicious cycle, no new listing, no new sales.  I think I am out of my funk now though, so hopefully my sales will start picking up.

I was beginning to wonder if this book would ever sell.  I’ve had it listed forever, since before I opened my eBay store.  I paid $2 for a big box of misc stuff at a yard sale on a Sunday afternoon a couple summers ago, and this book was one item in it.  (It’s brand new, and includes cookie cutters, etc.  It’s cute!)

I’ve sold several Dumbos recently.
I actually can’t remember for sure where I picked this one up.  VV maybe?

I just picked up this Tigger a couple weeks ago.  Tigger sold quickly to a grandma.  Apparently her adult son got a blue Tigger like this for Christmas, and he considers it a collectible.  His son (her 3-year-old grandson) wanted to play with it, but daddy said no, so grandma wanted to buy grandbaby another one he could play with.  I thought that was sweet.

I just picked these up a couple weeks ago too, at a consignment store.  There weren’t any others listed at the time, and they sold quickly.  I’ll be keeping an eye out for these in the future, and will pick them up if they are in good condition.
I took this coat to 2 consignment sales in the fall, and it didn’t sell at either.  It’s my only coat that didn’t sell.  I have no idea why.  I think it’s adorable.  I listed in on eBay last week and it sold in just a few days.
Here are a few of my favorite sales from the last couple weeks:

I always look in the baggies of toy dishes at Value Village to see if there is anything good amongst the blah and rubbish.  A few months back I found a bag with 2 Baby Alive bottles that make sucking and burping sounds.  I finally got around to listing them, and both sold within just a few days.  (The rest that is not eBay worthy I will put into my own baggy and re-sell at an upcoming consignment sale.)

I thought these were really cute!

I had read somewhere that Caboodles sell well.  I found one a couple weeks ago at Value Village, and a second one the next week.  I finally listed both the same day.  A smaller one instantly had a bunch of watchers, but this bigger one was the first to sell.

I love finding Thomas Duplos!  I actually have a bunch I need to get listed.  My goal was to get them all listed before Christmas, but alas, it did not happen.  Almost all those that I did list have sold.

I am a plush lover who cannot be bothered with Beanie Babies.  They have never seemed like they were worth the effort.  This guy, however, I will make an exception for.  He’s so cute!  He was the “extra” in a bag from Value Village.

Last summer I picked up Stephenie Meyer books when I found them cheap.  I am sure I didn’t pay more than $1 for any of these, at most.  Imagine my surprise when I got the 5 together and realized I didn’t have any duplicates!  I sold them as a lot.

For some reason I really liked this Ugly Christmas Sweater, and I actually thought about keeping it for myself.  But I knew I would never actually wear it, so to eBay it went.  My hesitation in listing it caused me to price it a tad higher than my other sweaters I was selling.

I bought three plush last month at a consignment sale – Simba, Eeyore, and Minnie below.  I paid $7 total for the three.  Minnie was the last to sell (in less than a month), for a grand total of $94.85.

This summer I bought a couple totes full of PVC Disney characters.  One I sorted out, photographed, and listed.  The other is still waiting for my attention.  The lot below is one of the last I had left from the first tote.  I paid $7 for the tote, and have sold at least 10 different lots for $15-$20 each.  The organizing and photographing, etc, took some work, but it’s been worth it.
These PVC toys I found in a baggie at Value Village.  They are tiny.  They took a couple months to finally sell.

For weeks now I have written this post in my head, picking out my favorite five sales of the last week.  Today I’m actually taking the time to share them!  With no further ado . . .

This big Simba plush sold yesterday.  I have several Simbas in my store, and they will often be the items with the highest number of watchers.  But having watchers isn’t the same as having buyers.  Some have been hanging around for months.  But, when I found this big guy at a consignment sale a few weeks ago I knew I had to pick him up.  He’s just so cute and cuddly!

‘Tis the season!
I just found this bear on Monday morning at Value Village.
He sold in less than 12 hours.

Love, love, love Build A Bear clothes and accessories.  Awhile back I bought a Koala bear wearing a ballerina outfit and this hat for around $3.  Sold the ballerina outfit last week, the hat this week, and still have the Koala to sell.

I also love these toys!  They are Woody and Jessie action figures, but they have pull strings on their backs (like the dolls) that make them talk.  They’re adorable!  I found them at VV a few months ago.  I was so glad to see them go – they’ll make some kiddo very happy.

I’ve been thinking about making this a weekly update for awhile now.  Just for fun, here are my favorite five sales of the week, and favorite five newly listed (still for sale) items from this week.
Favorite Five Sales
Earlier in the week I thought about posting a complaint about the lack of sales – NONE for three days!  Crickets all of Sunday, Monday, and Tuesday.  And then Wednesday rolled around and I had multiple sales, a couple more yesterday.  Nothing so far today.  All in all I’ve only had ten sales in the last week.  Definitely the worst sales week since I opened my store almost two months ago.  Boo.  But, on to my favorites of the sales I did have!
Kenny
This was the second time Kenny sold.  This time he was actually paid for.
Valentine Dragon
I got this guy as an “extra” in a plush bag at Value Village at the beginning of the year.  (I bought the bag because I actually wanted whatever he was in the bag with – no longer remember what that might have been.)  I thought he was cute, so gave him to my oldest on Valentine’s Day.  He never gave him a second glance.  What’s a mom to do?  Sell him on eBay, of course.
The Walt Disney Song Book
I picked this book up at a yard sale for $1 a month or two ago.  It is a book of sheet music.

I generally steer clear of generic (non-character) plush, but I found this guy NWT at Value Village awhile back.  I thought he was cute and different enough that I would give him a chance.  (Probably paid 74 cents for him.)
Cranberry Thanksgiving
I have found two copies of this book recently.  This one is the nicer of the two, purchased at Value Village for 52 cents sometime in the last month.  (For some crazy/odd/maddening reason, the first photo I take of the day on my new camera comes up with an error message, and it will NOT let me edit it.  NO idea why.  Super frustrating.  And the reason you can see so much of my floor in the following photo.)
Favorite Five New Listings
Some of my favorites of my recently listed items.  None of these have sold . . . yet.
SUVasaurus
This may never sell.  Who is going to be looking for this?  The tag says it is a SUVasaurus.  But I thought it was funny, so I took a chance on it.  Paid 74 cents for it at Value Village, and listed it just over a week ago. 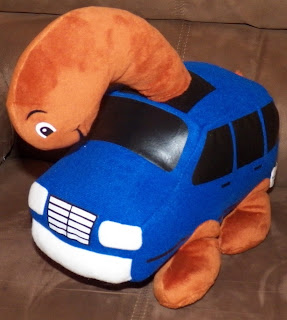 Muppet Finger Puppets
Picked these up at a yard sale sometime this month.  Paid maybe 50 cents for them?  They are finger puppets.  From Starbucks.  Apparently these are two of a series of six. 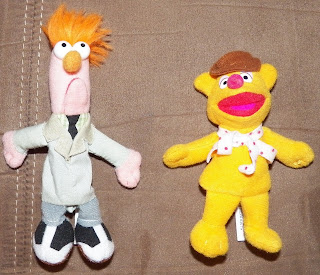 Lilo & Stitch Potato Head Surf Board
I listed a few of the potato head accessories I bought in Florida. This one is my favorite because I couldn’t find any others listed.  It is a potato head surf board.  On a related note, there is apparently a “Surfing Spud” Potato Head that is very hard to find, and sells for a decent amount on eBay, should you ever come across one.  (Completeds HERE.)

Wallace & Gromit Photograph Album
I think I paid a quarter (maybe 50 cents) for this a couple weeks ago at a Boy Scout rummage sale.  It is a Wallace and Gromit photo album.  As in, it will hold 30 of your photos.  It appears to be new. 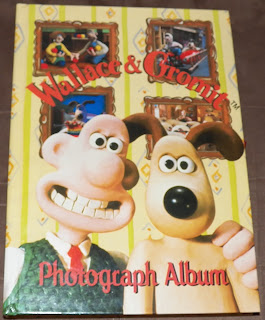 Star Wars Ewok Adventures DVD
Shhhh.  Don’t tell my husband about this one.   We’ve been talking about buying this movie recently.  I came across it new for $15.  I bought it.  I looked up completeds.  It’s out of print, so new copies are hard to come by.  I listed ours high.  Didn’t tell my husband I bought it.  I figure I can sell this one and buy a used copy with the profits.  Then it will be like we got the movie free!

And, just for fun, here is my current Facebook status, that I updated this evening:

I stuck my head in Hinton’s door to check on him (he was already in bed) after putting Kason down to sleep.

Hinton: Mommy, come here, I want to talk to you for a minute.

Me: What do you want to talk about?