Last Saturday I went to a local sale of kids’ items.  It’s not a consignment sale – people can rent a space in a school gym and sell their own things.  It’s like a bunch of small kid-themed yard sales.  It happens twice a year, and just runs for four hours on a Saturday morning.  It used to be THE sale around here.  But now two big consignment sales also operate in my town, and I think most of the sellers have switched over.  The gym used to be crammed with booths, but now it seems half empty.  I like the organization of consignment sales, but really like the yard sale/treasure hunt aspect of the booths at this sale.

Even with a significant decrease in sellers, I still had pretty good luck, including finding the following book lot.

AlphaPets is a series with a book about a different animal representing each letter.  I looked up the series on my phone quickly and it looked like it sold fairly well, so at a quarter apiece I thought I’d give it a whirl.  I was really happy when I got home and discovered the set was complete.  There weren’t any other complete sets listed when I listed mine last night, so I probably could have gotten a bit more, but I was hoping for a quick flip, so I went with the price that the set seemed to sell at consistently.  And a quick flip it was – the lot sold in less than a day!

Here’s a link to recent completeds.

I tried to go thrifting this morning, two boys in tow.  The boys were actually great, even my youngest who has a low tolerance for thrifting.  The problem?  Nothing to buy!

Our first stop was Bellies, Babies + Beyond, which is a sale that happens twice a year.  It just runs for four hours, and has a lot of small booth-type-areas where people sell their own items.  In the past it has been PACKED, with buyers and sellers.  Hard to navigate a stroller through.  Today?  There was actually a little empty space at the back of the gymnasium where they could have had additional sellers, and there were noticeably less buyers there too.  There was a $2 entrance fee, and then I paid a whopping $2 total for a pair of Toy Story pajamas and a snowsuit.  There have been times in the past in which I’ve left that sale with a full trunk, so this was a bit of a letdown.  We then visited a kids’ consignment store – no finds.  We stopped by Value Village.  The first person I run into is a gal I met at the Meet-Up, and the only other person who sells kids items.  Of course!  She is actually incredibly nice, and she did have a cart full of plush.  I found a bag with a Fred Flintstone plush and a Bugs Bunny plush ($1.99) and my oldest found a bag of Army men ($0.99).  One final stop at a small local thrift, but there was a sign on the door that they were closed for the day.  O-kay.  All in all, a bummer of a thrifting day.

The Birthday Boy:
My youngest is two today!

Here are a few of my favorite sales from the last couple weeks:

I always look in the baggies of toy dishes at Value Village to see if there is anything good amongst the blah and rubbish.  A few months back I found a bag with 2 Baby Alive bottles that make sucking and burping sounds.  I finally got around to listing them, and both sold within just a few days.  (The rest that is not eBay worthy I will put into my own baggy and re-sell at an upcoming consignment sale.)

I thought these were really cute!

I had read somewhere that Caboodles sell well.  I found one a couple weeks ago at Value Village, and a second one the next week.  I finally listed both the same day.  A smaller one instantly had a bunch of watchers, but this bigger one was the first to sell.

I love finding Thomas Duplos!  I actually have a bunch I need to get listed.  My goal was to get them all listed before Christmas, but alas, it did not happen.  Almost all those that I did list have sold.

I am a plush lover who cannot be bothered with Beanie Babies.  They have never seemed like they were worth the effort.  This guy, however, I will make an exception for.  He’s so cute!  He was the “extra” in a bag from Value Village.

Last summer I picked up Stephenie Meyer books when I found them cheap.  I am sure I didn’t pay more than $1 for any of these, at most.  Imagine my surprise when I got the 5 together and realized I didn’t have any duplicates!  I sold them as a lot.

For some reason I really liked this Ugly Christmas Sweater, and I actually thought about keeping it for myself.  But I knew I would never actually wear it, so to eBay it went.  My hesitation in listing it caused me to price it a tad higher than my other sweaters I was selling.

I bought three plush last month at a consignment sale – Simba, Eeyore, and Minnie below.  I paid $7 total for the three.  Minnie was the last to sell (in less than a month), for a grand total of $94.85.

This summer I bought a couple totes full of PVC Disney characters.  One I sorted out, photographed, and listed.  The other is still waiting for my attention.  The lot below is one of the last I had left from the first tote.  I paid $7 for the tote, and have sold at least 10 different lots for $15-$20 each.  The organizing and photographing, etc, took some work, but it’s been worth it.
These PVC toys I found in a baggie at Value Village.  They are tiny.  They took a couple months to finally sell.

For weeks now I have written this post in my head, picking out my favorite five sales of the last week.  Today I’m actually taking the time to share them!  With no further ado . . .

This big Simba plush sold yesterday.  I have several Simbas in my store, and they will often be the items with the highest number of watchers.  But having watchers isn’t the same as having buyers.  Some have been hanging around for months.  But, when I found this big guy at a consignment sale a few weeks ago I knew I had to pick him up.  He’s just so cute and cuddly!

‘Tis the season!
I just found this bear on Monday morning at Value Village.
He sold in less than 12 hours.

Love, love, love Build A Bear clothes and accessories.  Awhile back I bought a Koala bear wearing a ballerina outfit and this hat for around $3.  Sold the ballerina outfit last week, the hat this week, and still have the Koala to sell.

I also love these toys!  They are Woody and Jessie action figures, but they have pull strings on their backs (like the dolls) that make them talk.  They’re adorable!  I found them at VV a few months ago.  I was so glad to see them go – they’ll make some kiddo very happy.

Twice a year where I live there is a sale called “Bellies, Babies & Beyond.”  It’s not exactly a consignment sale – at least it’s not like the mega-sales everyone else seems to have access to.  This is more like a flea market with a bunch of different kid-themed-booths packed into the gym of a high school.  Like a bunch of mini yard sales all in the same location – everyone selling their own stuff, marked with their own pricing.  You can haggle if you’re so inclined.  It’s a fund raiser for a local school.  The folks selling their stuff have to pay a fee, and there is a $2 admission at the door.  It only runs from 9 a.m. to 1 p.m., and it’s usually packed.  Anyway, as a bargain lover I always look forward to it, and was there shortly after they opened the doors, two kids in tow (while my husband was at work).  Here’s what we (my son, mostly) found:

Toys!  Handy Manny’s toolbox was $3.  Mac with trailer was $1.  Bob the Builder toy $1.  Dinosaur Little People (5 piece) set $1.50.  Robot from Toy Story $1.  Princess Fiona $0.25.  A character from Kung Fu Panda was free.  These were all things my son picked out.  The tool box and Mac he will probably get to keep.  The Bob the Builder toy, dinosaurs, and robot will probably eventually go into some toy lots that I am building up (but he’ll have fun playing with them in the meantime). 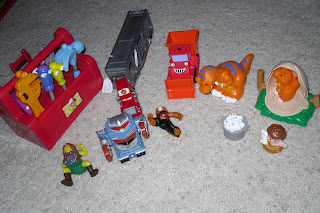 Footy pajamas, 4T, $1 each.  I buy almost all of my kids clothes from yard sales, but for some reason PJs are the one thing I don’t always find enough of.  My son really seems to like the one pair of footy pajamas he has right now, so I was happy to find these. 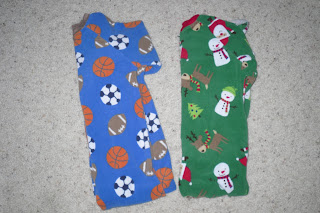 A skunk costume! Size 6-9 months, $3.  I was keeping an eye out, trying to find something for the baby.  This one won me over – on the back side it says “little stinker” which I thought was really cute (it’s hard to see in the picture).  Plus, I don’t see a lot of (any?) skunk costumes, which might make it easier to re-sell next year. 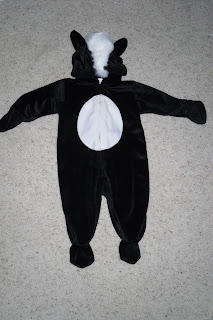 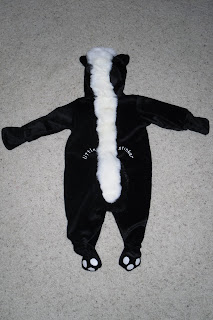 Exersaucer $20 $18.  I looked at this a couple times as I was walking around (I usually make at least a couple laps through the gym – it’s so much to take in, it’s easy to miss things.)  We already have an Exersaucer for the little one, and $18 isn’t super cheap, but when I would look at it I saw money hanging off of it.  It has lots of Switch A Roos, and nice ones.  (I bought an Exersaucer for $5 at a yard sale this summer and pieced it out and made a decent profit.)  I actually like this one so much I may get rid of the one we already have, and hold on to this one until my son outgrows it.  It was priced at $20, but after I handed the seller a $20, she said she’d give me a discount and handed a couple dollars back.  Who am I to argue that?  And then, being even nicer, she abandoned her booth and carried it out to my car for me!  (She could tell it would be a bit of a challenge for me because I had a bag of goodies over one arm, a baby strapped to my chest, and a three-year-old to keep track of.)  That’s customer service! 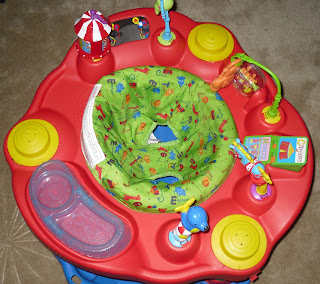 After the big sale we stopped at one church rummage sale that we had passed on our drive over.  I bought a Blues Clues wheeled suitcase (50 cents), some Winnie the Pooh dollhouse furniture (50 cents), Sorry (75 cents), Chip and Dale train car (ten cents and kept my son entertained the entire time we were there – great investment!)  I will try to resell the suitcase and Pooh furniture. 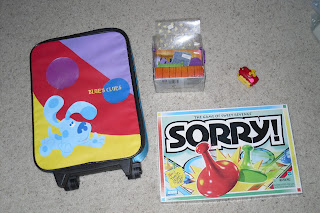 That’s it for this rainy weekend!

Linking up with Coupon Tipster and The Thrifty Momma.