I’m looking for a deal.  And inventory.  I can’t help myself.
This afternoon we spent several hours and several hundred dollars at Downtown Disney.   This was one of our last stops: 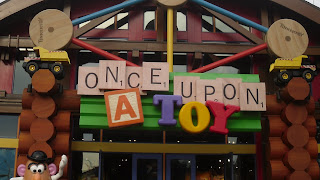 When we walked in we were greeted with numerous Potato Head displays.  There were even tables set up where the kids could put them together and play with them.  While my oldest busied himself at one of the tables, a “cast member” explained that the parts were a little over $2 per piece, or you could buy as many as you could stuff into a smallish box for $25, or as many as you could stuff into a bigish Potato Head container for $50.
One of the first things I saw when looking around was Mickey Mouse hat ears. 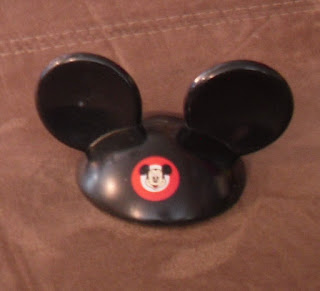 I picked one of these up at a yard sale a few months back, and sold it for around $10.  Immediately my mind was doing the math.  I would only have to re-sell around 5 of them and I would make my $50 back!  And I could cram a lot more stuff into that Potato Head!
I decided to think on it a little more.  We went to dinner (T-REX, like Rainforest Cafe but dino themed, the first time I had ever seen one) and I spent a little time looking up Potato Head accessories.  Some sell, some don’t.  Other than the enormous lots, I couldn’t find a real rhyme or reason to it all.
Should I risk it?
Well, sure!
I let my oldest pick out what he wanted first.  Of course they were mostly the big pieces.  Then I got to work picking out a bunch of other pieces, some to sell individually, some in small lots.  We set out all the pieces and I got busy trying to puzzle piece them all into my big Potato Head container to maximize space. 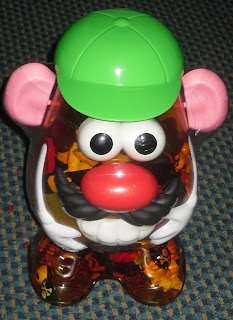 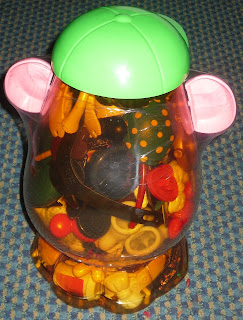 How many did I get in there?  I’m not entirely sure, and I won’t know until I get home.  There is no way I am going to start pulling them out, because there is no way I will be able to get them all back in!  But, I feel fairly confident that I have enough fun pieces to sell that I will at least cover the entire cost of the Potato Head purchase.  Which means whatever I keep for my son will, theoretically, be free!