So, I trekked over to the estate sale across town this morning, two boys in tow.  It started at 8 a.m., but we didn’t make our appearance until around 8:30.
It was pretty much just as described in the Craigslist ad.  Rack upon rack upon rack of clothes.  I’d say about 2/3 of them still had the tags on them.  I overheard the folks running the sale (relatives of the deceased) telling customers in whispers that the owner had passed away, and yes, she was a bit of a hoarder.  Ya think?
I’d guess 90% of what was out was clothes.  I spent a grand total of $60.  This is what the back of my Jeep looked like when I was done shopping: 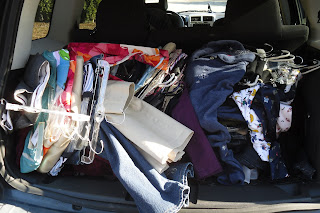 I organized the items when I got home, and here was the breakdown:
14 shirts/blouses
3 sweaters
7 jackets
9 pairs of pants
1 long skirt
3 full outfits (two tops with matching skirts, one top/pants outfit)
13 ugly Christmas sweaters/vests
7 Halloween sweaters/vests
1 pair of workout pants (for me)
I know that only adds up to 58 items – I’m not sure if I counted wrong as I was inventorying, or if the gal who counted up my items at the sale counted wrong.
I am not very knowledgeable about women’s clothing brands, but from what I could determine I think most of the items were originally purchased at either JC Penney or Macy’s.
I started by picking out some brands I recognized, but my strategy quickly changed to passing over the clothes with tags that had lower original prices (in the $30 range).  I tried to focus on items that had originally cost $60 or more.
My four-year-old son was pretty patient as I flipped through rack after rack of clothes.  He insisted that we buy me the following (totally maroon) outfit: 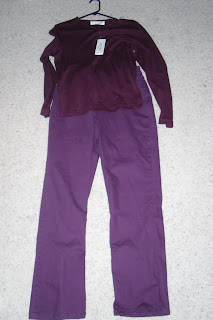 Three of the Halloween sweaters and about half of the Christmas sweaters had been previously worn, everything else is NWT.  A $60 investment, but I should be able to make my money back after selling the first 3 or 4 items.
It was an estate sale, but they had everything outside.  Not sure why, but they were very clear that they had a whole house full of stuff to get rid of, but that they did not want anyone shopping through the house.  They said they would have completely new stuff out tomorrow.  I’m tempted to head back over there in the morning, but am trying to fight it.
Sooo, it’s obviously time for me to open a store already.  I’m using my ridiculously large typing project as an excuse to procrastinate.  As of yesterday, I’ve passed the half way point for the manuscript typing!   Can’t wait to be able to fully focus on the eBaying again.