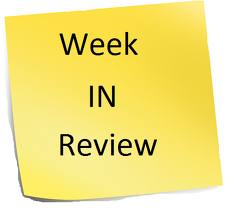 Another week gone.  This week of selling was cut short a little bit because all of my auctions ran for 5 days instead of 7.  My original goal at the beginning of the week was to sell 5 of my 76 listings.  Towards the end of the week I decided that my ongoing goal for sales will be 10% of my listings in any given week.  I have no idea if this is high or low in comparison with what anyone else tries to sell, but for me I think it is a fairly obtainable goal.  For this week 10% would have been 7 or 8 sales.  I ended the week with 11, so I was happy with that.  Of those 11, 7 were repeat listings, 4 were new listings.  I also listed a BIN item on Sunday that sold on Monday that I shipped out with the rest of last week’s sales.

So are Sundays really the best day to list and have your auctions end?  Well, I can’t say for sure, but at the start of Sunday I only had bids on 4 of my items, and by the evening it seemed like every time I checked another item had a bid on it.  Several items had multiple bids.  Maybe because it was a Sunday, maybe because of the upcoming holidays, maybe a combination.  Regardless, I’m not complaining.

This week I sold a couple plush, a couple kids books, a Jansport bag, two pairs of infant shoes (to the same person), a girls holiday dress, a Thomas toy, and a couple other items.  Around $130 in all.  Again, my per-item sales price was not very high.  But it’s better than nothing, for now.

Monday was kind of a hectic day for me since 8 of my sales had been paid for, and I was trying to get them all out that day.  But it was also a one-cent listing day, so I was trying to get new listings up too.  It was not fun to have them land on the same day.  I’ve discovered that the shipping process is my absolute least favorite part of the whole eBay experience.  I’m starting to dread it.  It takes forever, and it has become kind of a grind for me.  But, it’s all part of the eBay package (haha) so I’ll stop my complaining and move on.

I still have 2 sales from last week that have not yet been paid for, and one person who paid with an echeck, which is a new one on me.  I e-mailed her to let her know that I had received her payment but that I was following the suggestion in the e-mail I received in waiting to ship her package until her check has cleared.  Hopefully it doesn’t take too long.

As I mentioned before, I did spend a chunk of time listing on Monday.  Between Sunday and Monday I got  18 new listings up, and relisted 65 items, for a total of 83 listings.  I’ve sold one BIN item so far, so in keeping with my (around) 10% goal I will hope to sell 8 more items this week.  We’ll see how it goes . . .