I haven’t done much with Craigslist in the last couple months.  I have a number of listings that I have pretty much been ignoring (as has everyone who looks at CL).  A couple months ago I set up a separate e-mail address for my CL account because I was having a hard time keeping track of CL e-mails amongst everything else, and I could not always remember what I had or had not responded to.  So, when I checked my CL e-mail account on Tuesday for the first time in several days, I was surprised to have several e-mails waiting for my attention. 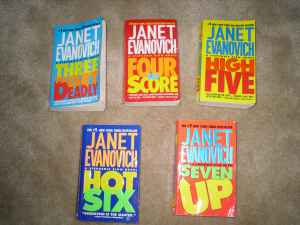 The first e-mail was from a guy want to buy the Janet Evanovich books above.  I had them listed at $5 total for all 5 – they were kind of beat up, but still readable.  Not only did he want to buy them, but if I was willing to hold them for him for 24 hours he would pay me not $5 but $10!  Easy decision, since he was the only one offering me any money for them.  (Interestingly, this was not the first, or even second, but the THIRD time I have been offered more money than what I was asking for an item posted on CL.)  And to sweeten the deal?  I picked these books up last month at a yard sale on a rainy Saturday afternoon. The day had been rainy enough that I hadn’t even bothered to head out in search of yard sales that morning.  But, when out running errands later that day I saw a sign for a neighborhood sale I had noticed on CL the night before (and had been planning to go to that morning before being rained out).  Since the sign was up, the rain had let up, and they were supposed to be Saturday-only sales, I decided to check it out.  And, yes.  There were several sales still going on.  At the sale with these books the people were obviously ready to be done.  I was told that everything under the canopy was free.  So, I grabbed these 5 books, the newest hardback in the same series (which I have already sold on half.com), a book from the Twilight series, and a pair of maternity pants.  Freebies = free money, yay!  (In fact, now I wish I would have taken even more of the books – she also had a bunch of Sue Grafton novels – but, since they were free, I didn’t want to seem greedy.) 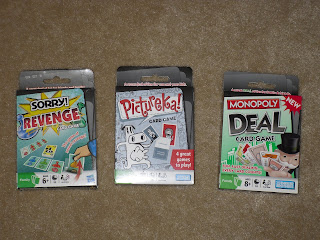 And, it is a small world.  Because I just sold the above games via a CL ad to someone I went to high school with!  A year or two ago one of my mommy friends from my son’s playgroup posted an ad for a jogging stroller and one of the other mommies in the same playgroup answered it.  It was kind of odd and kind of funny.  We all laughed about it.  But it is weird when it happens to you.  (And just to add up the random facts: we live in a town of about 150,000 people, around 4 hours away from where we grew up.  She now lives about a mile away from me.  And we actually just got our kiddos together for a play date for the first time ever last month.)  Love the random.  Anyway, I had bought a bunch of these games when I was able to get them inexpensively a year or two ago.  She was happy to buy them and will use them with some kids she works with.  Win/win.